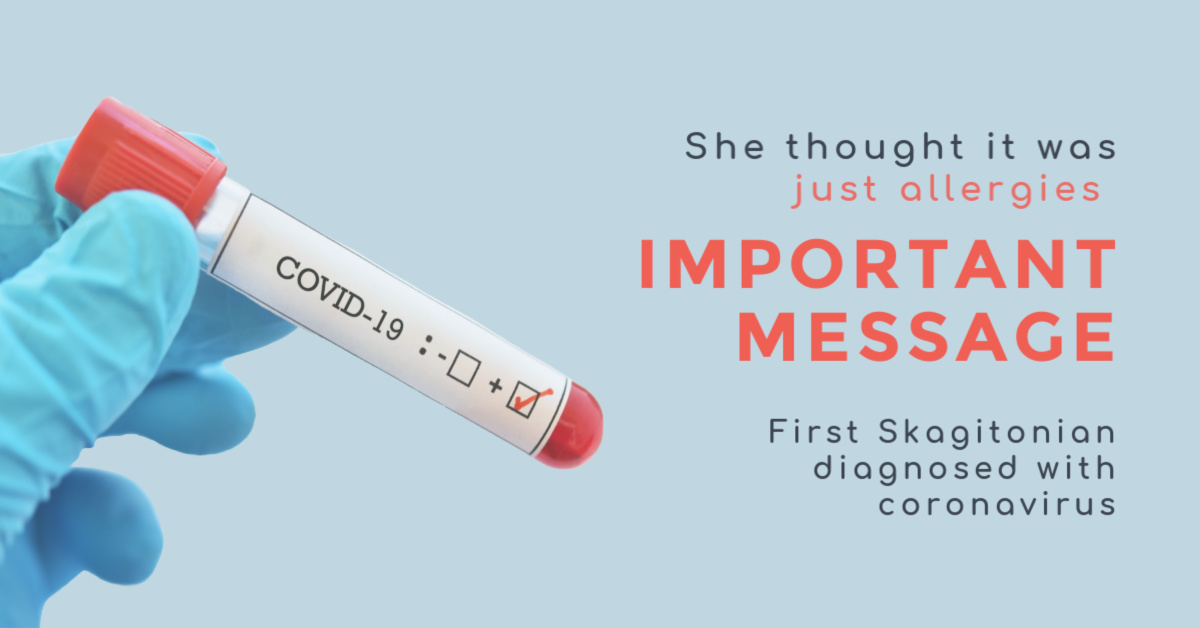 A very important message from the first Skagitonian diagnosed with coronavirus.

In life, we generally want to be first. Get that gold medal, be the valedictorian, hold the world record. Like most of us, Susanne had never been first before. Until March 10, 2020.

Susanne, 49, is a recent transplant to Skagit County, having moved here from Enumclaw in January. She decided to live fulltime in her 37-foot-long RV with her rescue dog. On March 10th, Susanne became the first person in Skagit County to be diagnosed with COVID-19.

She began feeling symptoms on Saturday, Feb. 22nd. It’s just allergies, she thought. She’d been through this every year and this time didn’t feel any different. This was weeks before Governor Jay Inslee announced the “Stay Home, Stay Healthy” order and things started shutting down. Weeks before most people began taking the pandemic seriously. Susanne continued to live her normal life, as we all did. Her story could be any one of ours.

As an avid square dancer, she drove south for a square dancing lesson, followed by a square dance. “I felt crappy enough that when I got halfway down to Lynnwood, I thought that if I have a fever when I get down there, I’m going home. If I don’t, I’ll toughen up,” she says. “I didn’t have a fever.”

“I was really sick the next day. The dog was really concerned about me. I didn’t want to get out of bed, I was getting dehydrated,” she says, crediting the dog with making sure she drank and ate. “But by Monday morning, I felt fine.”

On Tuesday, she went down to her 81-year-old mother’s house in Enumclaw and was cleaning stuff out. Luckily, her mom wasn’t there. On the way back, she ran errands, making stops at several stores, as we all used to do before the outbreak. She had contact with many people along the way.

“I had a long day and my allergies were really flaring,” she says. “At that point, I realized that I’m not going to manage to make dinner, so I stopped at a drive thru and picked something up.”

She was looking forward to a square dance coming up on Sadie Hawkins day, February 29th. As a lifelong allergy sufferer, she knew the feeling of her allergies working their way into her chest, causing pneumonia. She thought, with some rest, in a few days she’d be better.

“At this point, I’m like 99.9% sure that I’m not contagious. It’s just allergies,” she says. “There was no fever, all the drainage was clear. That’s an allergy, not an infection.”

However, she thought she better not go to the dance. Plus, “nobody wants to be around mucus girl!” she joked.

By March 2nd, she could hardly get out of bed. She certainly couldn’t make anything to eat. She didn’t even feel like making herself tea, so she picked up a few iced teas at a drive thru to keep herself hydrated. At 11:15pm, she got back to her RV site and checked her email. Sitting in her car, she read the news. One of her square dancing friends had been hospitalized and died. He had been diagnosed with COVID-19.

She knew she had to get tested. She drove to Overlake Hospital in Bellevue, arriving at 1:08 am, March 3rd, less than two hours after she found out about her friend.

“I drove south because they had people down there who had [COVID-19], so they would be prepared. And they were,” she says. Hospital staff immediately handed her a mask and placed her in a negative pressure room. While she waited to be seen, she turned on the TV.

“I don’t normally watch TV, but in like 5 minutes, I was concerned that I had been out in public and giving this to other people,” she says. “Just five minutes of TV and I was like … ‘Holy crap, no wonder people are freaking out.’ I shut it off.”

They took a chest x-ray and tested for non-COVID-19 respiratory viruses. The results came back quickly – all negative. The x-ray revealed what she already knew – bilateral pneumonia.

But still, she had no fever so she didn’t quite fit the COVID-19 testing criteria at that point in time.

“My symptoms weren’t what we were hearing,” she says. All of her square dancing friends who ended up testing positive had different symptoms, “and none of them were what you had to have to get a COVID-19 test. The one thing we had in common was that there was a time when we all were feeling better so we went out and did things. And then we crashed harder.”

Knowing she had been exposed and a friend had died from COVID-19, hospital staff decided to test her. She was told the results would be available in 24-48 hours. They gave her a box of masks to wear in public and sent her home.

Other friends were also tested on March 3rd and their results were in by March 6th. Of five friends tested, four came back positive, but Susanne was still waiting on her test. On Sunday, March 8th, she got a call from Skagit County Public Health, which had also been waiting to receive her test results. There had been problems processing her test. So Public Health arranged with Skagit Valley Hospital to have her retested early the next morning.

Approximately 24 hours after the retest, she got the call she was dreading. She had COVID-19. She spent the next hour and a half telling Public Health every place she’d been in the last 30 days. Fortunately, she lets her GPS run and it keeps track down to the minute.

Susanne spent the following two weeks in isolation. Once cleared by Public Health, she went out to enjoy some fresh air. From about 30 yards away, she had her first physical conversation with someone in weeks. She asked a man how he was doing, and his response left her astonished:

“Fine, not really doing anything because of this COVID-19. I think it’s a hoax. I don’t know anybody who had it or died from it,” Susanne recalled.

“Well, I’ve had friends die from it,” she responded. “And, hi! I just got out of isolation today!”

Later that day, while doing five-and-a-half weeks of laundry at the laundromat, she had a nearly identical conversation with a woman there.

“How are there still people who don’t think this is a thing?” she wonders. “They’re still denying it. That was kind of horrifying to me.”

She wants everyone to know that they can get this disease, even young people and those who do not have underlying health conditions that make them more susceptible to deadly complications.

She has hope for the future and is confident that with accurate, scientific information, the community will come through this.