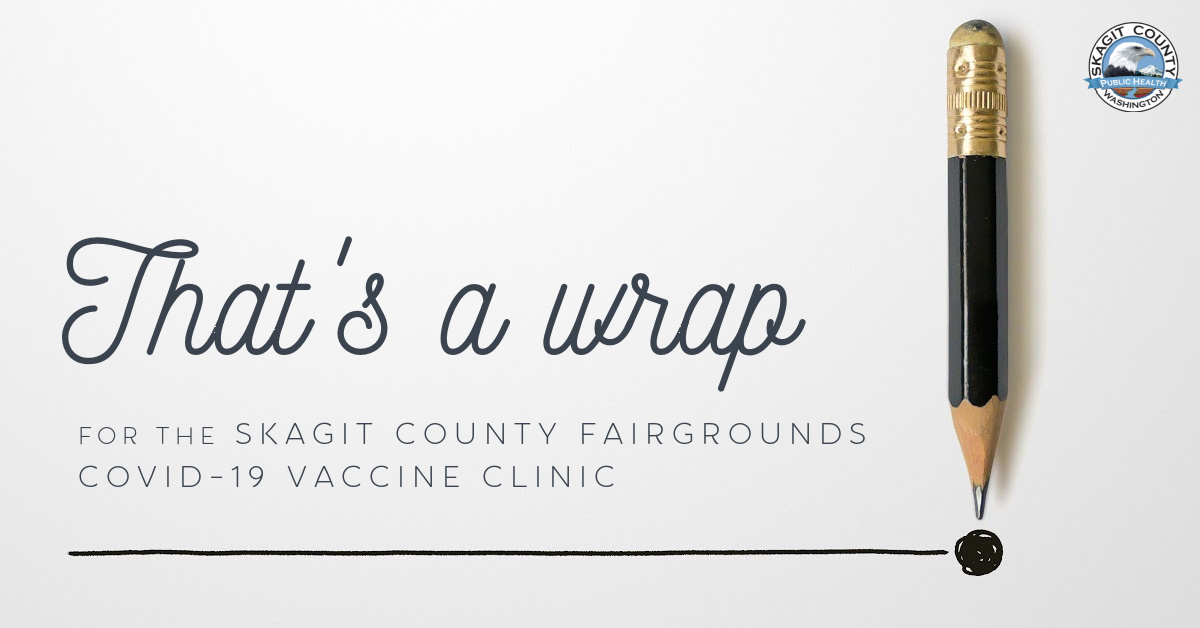 This Saturday, June 26th, marks the final day of operation for the Skagit County Fairgrounds COVID-19 Vaccine Clinic. This clinic, run by Skagit County Public Health, has been in operation consistently since December 2020 when the COVID-19 vaccine first became available in Washington state.

Before the Vaccine Site opened, a robust drive-through test site was already operating at the Fairgrounds by Public Health’s crew. In November of 2020, Skagit County Public Health was in desperate need of a new location for its COVID-19 Drive-through Test Site. Severe weather had literally ripped the tents out of the ground at the Test Site’s original location at Skagit Valley College. The Fairgrounds allowed for a safer—and slightly warmer—work environment, which provided a much-needed morale boost for our wind-worn staff.

Once established in the Fairgrounds F-Barn, Public Health quickly got its Test Site back up and running, administering over 10,690 tests until testing operations closed on March 12th, 2021. For a few months, staff was actually running testing and vaccinations at the Fairgrounds simultaneously, with vehicles being directed to all corners of the site by our traffic crew.

In the early months of vaccine roll-out, supply was extremely limited. Counties and other vaccine providers were receiving weekly shipments from the state, and at times shipments were much smaller than anticipated, or they were delayed due to bad weather. Healthcare workers and long-term care facility residents were prioritized first in December 2020 and January 2021. Eligibility was then expanded by the WA Department of Health to include other at-risk populations, including seniors 65 and older and those 50 years and older living in multigenerational housing.  Childcare providers and K-12 school teachers and staff followed shortly.

People all around Washington were scrambling to find appointments. On one particular Saturday morning, hundreds of appointment slots at the Fairgrounds were grabbed up in only 14 minutes flat!

By March 2021, certain critical workers became eligible for the vaccine, as well as pregnant individuals and those with disabilities over the age of 16. Then, eligibility expanded to all people 60 and older and people 16 and older with two or more co-morbidities.

Finally, all Washingtonians 16 years of age and older became eligible for the vaccine on April 15, 2021, and on May 13, the Pfizer vaccine became available to minors 12-15 years of age in Washington state. At this point, our focus shifted to those who may be less inclined to get the vaccine, or who may have inadequate access.

Public Health launched a Vaccine Hotline early on to help individuals who needed extra assistance in finding a vaccine appointment, offering service in both English and Spanish, six days a week. Staff also worked directly with community partners to ensure that vaccine services were provided equitably for all eligible individuals in our county. The Fairgrounds moved to provide evening and weekend hours on Thursdays and Saturdays to better accommodate our working folks. The site even stopped requiring appointments when it became evident that this step was creating an unnecessary barrier for some.

Staff sought to make the vaccine experience as easy as possible at the Fairgrounds. The drive-through option became a reality once testing wound down in F-Barn, allowing people to get their shot while sitting in their vehicle. At one point, the Fairgrounds even partnered with the Children’s Museum of Skagit County to offer free child-watching services so that parents and caregivers wouldn’t have that extra hurdle.

During its run over the past 6 months, the staff and volunteers at the Fairgrounds Vaccine Clinic administered just over 31,000 doses of the vaccine to eligible Washingtonians, both from Skagit and our neighboring counties.

From the beginning, this site was intended to be a gap filler; a location where people could go if they couldn’t get access to a vaccine through their doctor or pharmacy. But what the Fairgrounds ended up being was so much more. It was a hub, a safe space, and a second home to the hundreds of staff and volunteers who worked in its barns and outbuildings in 2020 and 2021.

The Fairgrounds and its crew saw many ups, downs…and everything in between. After providing COVID tests to thousands of people throughout 2020, it was a huge blessing—and a huge relief—to begin administering the vaccine at the site. The first day of vaccinations felt almost like Christmas morning for some; it felt like for the first time, we had a fighting chance.

So, as the team wraps up service at the Fairgrounds and puts its sights solely on mobile vaccine outreach, we reflect on the bitter sweetness of this moment. Many of us just assumed that our job at the Fairgrounds wouldn’t be over until COVID was done and gone. Maybe we expected our last day would be like a graduation of sorts, where we would rip off our masks and throw them in the air.

Unfortunately, COVID-19 isn’t quite done with us. We must continue to fight the good fight, to take precaution, and to urge our family and friends to get vaccinated.

Though our doors are closing at the Fairgrounds after this Saturday, Public Health isn’t going anywhere. We will be out in the community all summer long providing better, and more convenient access to the vaccine that will help see us out of this mess.

If you are still needing your vaccine and are able to, come see us during our last week at the Fairgrounds. We’ll be open Thursday from 1-7pm and Friday and Saturday from 10am-4pm. You can also find a list of all providers in our area by going to Vaccinate WA.

But if we don’t see you then, no worries. Check out our website for a list of our upcoming pop-up clinic dates. We’re excited to see you out and about, friends.